This month’s edition of Computer Arts magazine was not only a landmark 250th issue, it also celebrated their 20th anniversary – two decades of the magazine on the newsstand. The publication, which focuses on design and illustration in the digital world, wanted to produce a memorable cover and looked to Celloglas to help create it.

The cover was designed by duo Kjell Ekhorn and Jon Forss, who work under the name of Non-Format. To commemorate 20 years of Computer Arts, a design was created, reminiscent of a popular style at the time of the magazine’s first release at the end of 1995. 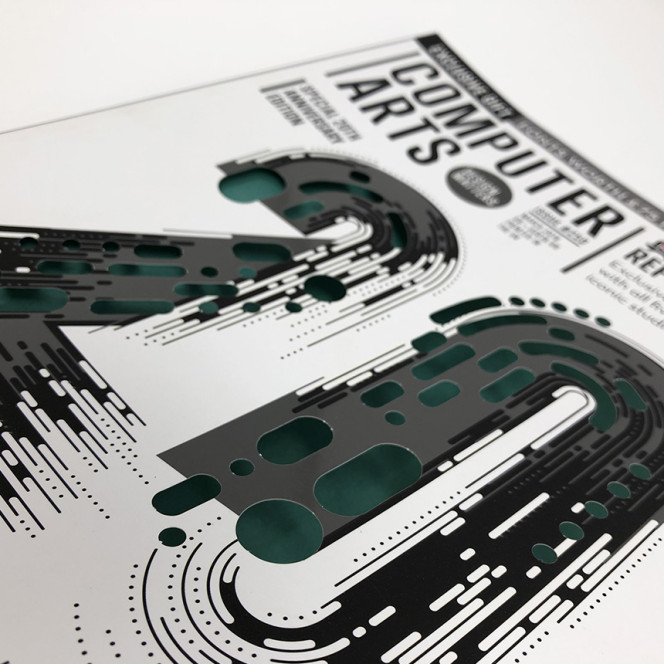 The covers were finished at Celloglas Leicester, with an all over Cellotouch laminate and a gloss silk screen varnish, prior to being die-cut. The design features a number ‘20’ which is made up of both print and a selection of apertures. A film was created as part of the make ready process, then a die was made and stamped into the covers. The holes, created on a Sanwa TRP 1060 SE die-cut machine, reveal one of 20 different coloured papers, supplied by paper specialist G F Smith. This 135gsm Colourplan art paper was bound immediately beneath the cover and can be seen through the die-cut holes, creating twenty cover versions of the magazine.

Julia Sagar, acting Co-Editor of Computer Arts magazine, commented, ‘We really wanted to create something special for our 20th anniversary issue of Computer Arts and once again Celloglas have helped us to achieve this. Celloglas help us to push design further in terms of creativity and with their input we’ve produced twenty collector-worthy cover designs.’

Sales Director at Celloglas, Steve Middleton, commented, ‘With all the covers we finish for Computer Arts, we love having the opportunity to use our finishes to aid their fantastic design. For this anniversary issue, we wanted to help create a unique effect for this momentous edition. We’re really pleased that we were able to die-cut such an intricate design, and the results are fantastic.’

Issue 250 of Computer Arts magazine also includes a special report on the 20 designers and illustrators who have most shaped the industry during the magazine’s lifetime, plus the first interview with all five core members of iconic studio The Designers Republic for over a decade.

Watch the video showing how this issue was created: